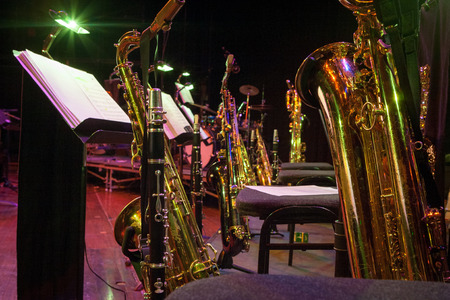 Few movements in American music are as iconic as that of the big band era of the 1930s and ‘40s. This unique breed of lively, energetic jazz gave birth to some of the nation’s most well-known and enduring musical stars, including Glenn Miller, Benny Goodman and Gene Krupa. Classic songs like Tuxedo Junction, Boogie Woogie Bugle Boy and Sing, Sing, Sing served as a perfect soundtrack to the mood of pride and patriotism that swept across the country in the lead-up to World War II. Today, these songs have become inextricably linked to this remarkable period in American history.

Next weekend, you can relive the sound of big band music in its heyday at the Spencer Theater for the Performing Arts in Alto, New Mexico—just a 10-minute drive from Ruidoso. On March 10 at 7pm, the Spencer Theater will host In the Mood: a 1940s Musical Revue, featuring the 13-piece String of Pearls Big Band orchestra and the In the Mood Singers and Dancers.

Over the course of the group’s 24-year history, In the Mood has played for international audiences, USO tours and even a 1997 Inaugural Ball for President Bill Clinton. Now, after touring the country for more than two decades, In the Mood will bring its famed show to the folks in New Mexico.

This promises to be a fun event for the whole family. The Spencer Theater will also be hosting a Classic Fried Chicken Buffet at 5pm before the show, so come hungry! And if you’d like to see a sneak preview of In the Mood, check out the video below.